There’s a saying about making documentary film that likens it to taking a bunch of sentences, slicing them up, putting them in a bag, dumping the bag out on the table, then trying to rearrange the pieces into a cohesive story, according to Walla Walla filmmaker Sarah Koenigsberg. 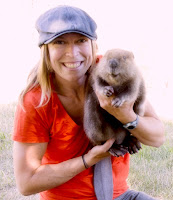 Koenigsberg’s first documentary, The Beaver Believers, tells the story of an unlikely group of activists from around the country who are united in trying to bring back the American beaver from the edge of extinction. These advocates believe that the beaver is a keystone species, that its near-demise at the hands of fur traders caused much of the West to become arid land, and that returning the beaver to healthy population levels would restore ecosystems, creating the biodiversity, complexity, and resiliency watersheds need to absorb the impacts of climate change.

“We had to really work as a team,” she said of the challenge of working with college interns to film the easily spooked animals in their natural habitat. “We had to learn to intuitively sense each other's movements. It was a really cool little dance that we ended up working out. Especially for students who'd never done anything like that before, watching them get it and watching their confidence build.”

Her path to becoming a filmmaker was circuitous. Like many young people, it took time for Koenigsberg to find her calling.

One of the stars of her first feature film.

With some theater experience in her early years, by the time Koenigsberg got to college she’d decided it wasn’t the career for her. An introductory class in environmental studies intrigued her, as did a geology class, both of which exposed her to the problems of pollution and climate change. An introductory film class she took required making a short film, and while putting it together she had her epiphany.

“The first time I put some clips together in a timeline, and put in some music, and [saw] what happens when clips go together with music, a light bulb clicked,” she said.

A critical component in her filmmaking style came when she did work with place-based collaboratives in the West. “[I was] meeting small groups of people, potentially with very different mindsets, recognizing that if they all care about the place they live, even if they disagree, they need to figure out how to work together and hear each other," she said, using a collaborative rather than a litigation model.

She moved to New York City, volunteering to work on film crews, jumping in to grab a light or hold a boom microphone. That dogged persistence earned her a stint on a film crew in Ecuador, which cemented her decision to go into documentary filmmaking.

“Being in the field, collecting stories of a community that had no voice in the world, but they were trying to have more sustainable agriculture to lead to better lives for their kids,” Koenigsberg said of her time in Ecuador. “It all just resonated.”

She returned to Walla Walla and started her own film company called Tensegrity Productions, after a term coined by architect Buckminster Fuller to describe the fluid interconnectivity in nature, a tensional integrity, or tensegrity.

Living out her principles and challenging her own presumptions is a key to being a successful documentary filmmaker, Koenigsberg believes.

“No matter how good your education, there are always other modalities of knowledge, other bodies of experience from living and working in a place, that you've got to listen to,” she said. “If you go in assuming you already know everything that person has to offer as a character or as a viewpoint, you're not going to give them the chance to give you the most little beautiful nugget of truth. You're just turning them into a very flat character. I want to find very vibrant characters who, through their personal journey, are hinting at much larger, global-level issues.”

Photos from Tensegrity Productions.
Kathleen Bauer at 10:12 AM
Share