Farm Bulletin: Response to a Reader 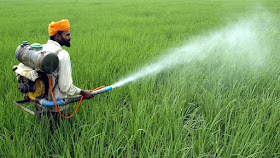 Under normal circumstances I don't post reader comments, but in this case I felt contributor Anthony Boutard's response to the question about short-straw grains, from his previous post about the durum wheat he grows at Ayers Creek Farm, was important to understanding the whole story.

I read a book recently that said the short straw varieties were specifically developed for warm climates like Mexico and India where rust is a serious problem. In your climate I'm guessing it's a wash.

Often the second half of a story is left out to create a myth, this is especially true with respect to the “Green Revolution.”* Short-straw grains allow fungicidal sprays to penetrate into the planting more effectively, and that is one of the reasons they are favored. In the spring, spray buggies douse the field to control rust and tall plants would make it hard to get the penetration needed for effective control of the disease. Outside of organic systems, rust is managed by fungicides.

Tolerance for rusts in grains is genetic and I see no evidence that it is linked to straw length. Logically, it doesn’t make sense. Next spring, take a moment and see where the rust and other fungal diseases develop in the grain field. It is in the low areas where airflow is impeded. You can easily see the yellowing of the plants in these patches.

The problem with short-straw grains in an organic setting is the rain splashes soil and fungal inoculum onto the leaves and they take longer to dry out in the morning. Rust inoculum that blows into the field can thrive on the wet leaves and stems. Modern varieties are shin high, right in the splash zone. The durum, wheat and barley we grow are over waist high, so the foliage is well out of the splash zone. They do well in an organic setting. Bear in mind, these long-straw small grains have been grown successfully for eight millennia or more without employing a chemical arsenal. That is why we favor them.

The pernicious nature of spraying was driven home when we were planting melons and a neighbor sprayed his wheat field. As the buggy passed by, the brown ground spiders exited in a mass, crawling over our hands and legs. Thousands and thousands of refugees, an indelible moment, along with the chemical stench of the insecticide.

Unfortunately, pushing short-straw grain varieties that require heavy use of chemical inputs including fertilizers, fungicides, insecticides and herbicides have damaged the health of farmers and ecosystems, especially in countries such as India and Mexico with lax environment controls. The Bhopal disaster was the result of a factory producing carbaryl, the insecticide marketed as Sevin.

Read more about legislative attempts to regulate spraying of pesticides in Oregon.

* Top photo shows an agricultural worker spraying pesticide on a short straw variety in India. These varieties require heavy use of expensive industrial pesticides (note the worker is unprotected from the spray). Often the seeds were genetically modified patented varieties, so farmers could not save the seeds from their crops as they had for millenia, and were forced to buy new seed every year or face prosecution.
Kathleen Bauer at 10:07 AM
Share